Fiber optic connectors are engineered to provide perfect alignment of the microscopic glass fibers used in fiber cables to transmit data. These sort of connections have to be highly precise in order to facilitate high speed fiber optic networking. This chart helps to identify some of the many fiber optic connector types available on the market today. 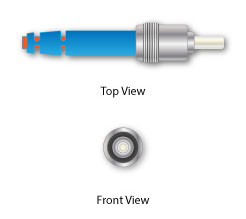 ST connectors were one of the first connector types to be broadly executed in fiber optic networking applications. The ST, or "Straight Tip" connector, was created by AT&T. The connector makes use of a 2.5mm ferrule. Because they all have the same ferrule size, the ST can be mixed and matched with FC, SC, FDDI, and ESON connectors using a hybrid adaptor. The connector stays in place with the help of a half twist bayonet style lock.

The ST connector is typically found on the end of a multi-mode cable, but this connector is gradually being replaced with multi-fiber connectors (LC and MTP). ST connectors can be plugged and unplugged from fiber optic cables easily and quickly. Typical insertion loss from matching ST connectors is 0.25dB. 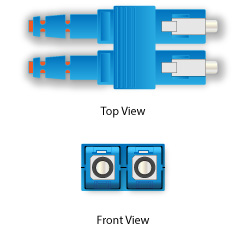 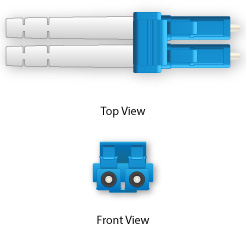 Developed by Lucent Technologies, the LC connector or Lucent Connector, measures about half the size of an SC connector. LC connectors are used for high density deployments where multiple fibers terminate within a confined space. A small form factor connector, the LC connector uses a 1.25mm ferrule with a retaining tab mechanism that is similar to that of a phone or RJ-45 connector.

Just as with SC connectors, the body of a LC connector is square shaped, and two LC connectors are commonly bound together with a plastic clip to create a duplex connection. LC connectors can be used with both singlemode and multimode cables. Matching LC connectors have an insertion loss of 0.25dB. 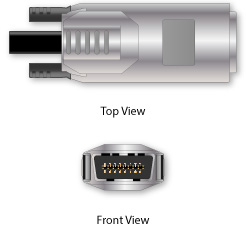 The first 10G copper standard to be published was the 10G-CX4. The 10G-CX4 connector offers low cost, low power and low latency. However, it is a larger form factor that uses bulkier cables than modern single-lane SFP+ standard connectors.

Copper cables that utilize the 10G-CX4 connector have a much shorter reach (up to 15 meters) as compared to fiber or 10GBASE-T cables.

The 4x connector is named for its ability to support 4 aggregated data links. Because this type of fiber optic connector is commonly used on Infiniband cables, it has become known as the "Infiniband Connector". 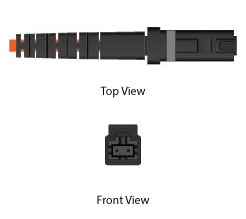 The Mechanical Transfer-Registered Jack (MTRJ) connector was created by AMP/Tyco and Corning. The MTRJ is a duplex connector that looks similar to the RJ-style modular. It uses a tabular locking mechanism and has a plastic body and ferrule. The ferrule technology used in MTRJ connectors is the same as that used for Multi-fiber Termination Push-on (MTP) connectors.

There are both male and female versions of the MTRJ connector, which uses pins for alignment. MTRJs are also available in both singlemode and multimode tolerances. Matched MTRJ connectors have a 0.25dB insertion loss for singlemode fiber and 0.35dB loss for multimode fiber. 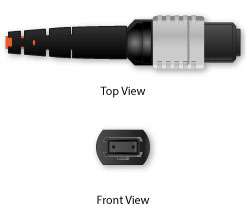 The MTP connector, manufactured by US Conec, is an improvement on the NTT designed MPO connector. The MTP connector terminates up to 12 strands of fiber in one ferrule and locks in place with a push-on/pull-off latch. A pair of metal guide pins protrude from the front of the connector.

Matched MTP/MPO connectors have a typical loss insertion of 0.25dB. 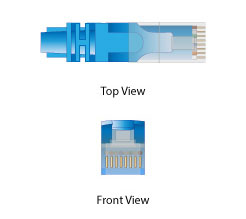 The RJ-45, or "Registered Jack-45" connector, is an eight-wire connector that is mostly used to connect Ethernet LANs devices. RJ-45 connectors look like larger versions of the older RJ11 connectors, which are used on wired telephones. In cable assemblies, RJ-45 connectors are not fiber optic connectors. Rather, they are the standard connector for CATx Ethernet cables, which are used to connect a network switch to a patch panel and/or for connecting a computer’s network interface controller to a data port. 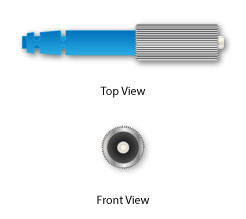 The D4 connector has a 2.0mm ferrule and uses a screw-on mechanism. It's an older generation connector that is spring loaded and keyed. The key prevents opposing ferrule end-points from rubbing together while mating. Due to its modest size, many D4 connectors can be loaded into a single fiber distribution frame.

The NEC specified the D4 connector and used it on all of their equipment interfaces. The NEC D4 was likely the very first connector to utilize hybrid ceramic/stainless or ceramic steel ferrules. It was extensively used in telecommunications networks in the late '80s and early '90s, and some may still be in use today. 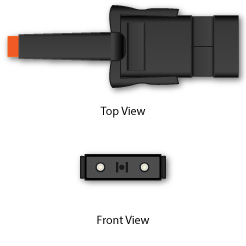 IBM created the Enterprise Systems Connection (ESCON) in the early '90s to connect their main-frame computers to other external devices, like tape drives and disk storage drives. The ESCON connector is an optical fiber, serial interface, half-duplex connector. It uses a 2.5mm ferrule and can be mated to ST and SC connectors using adapters. Today, ESCON connectors have largely been superseded by substantially faster fiber channel connectors (FICON). 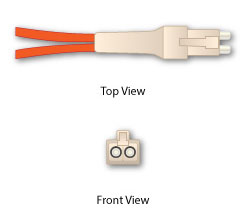 The Panduit Opti-Jack is a solid duplex connector that utilizes two duplex SC ceramic ferrules, each 2.5mm in diameter. The ferrules are independently spring-loaded and are aligned using conventional split-sleeve mechanical techniques.

The Opti-Jack is the size of an RJ-45 connector and is available in both male and female (plug and jack) variants. The connector's latch is modeled after the industry standard RJ-45 wall jack. It supports adapters, couplers, and conventional duplex jumper cables, although Opti-jack transceivers aren't broadly accessible. 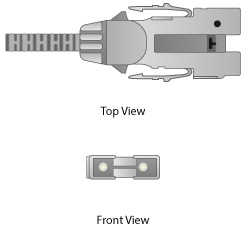 An FDDI, or Fiber Distributed Data Interface, is a local area network standard used to transmit data. The point at which the fiber optic cables terminate is the FDDI connector, also referred to as a MIC (Media Interface Connector). An FDDI connector contains two ferrules that are housed in a large plastic container that uses a squeeze-tab retention mechanism. Using adapters, FDDI connectors can be mated to SC or ST connectors.

FDDI provides an optical standard of 100 Mbit/s for data transmission. It can be used in a local area network, extended up to 200 kilometers (120mi), and supports thousands of users. 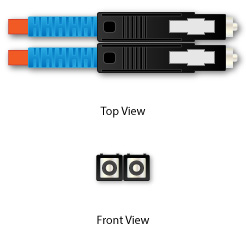 An MU, or Multi-termination Unibody connector, looks like a miniature version of the SC connector. MU connectors are a type of SFF connector manufactured by NTT. They are more popular in Japan than they are in the United States.

MUs have a ceramic ferrule of just 1.25mm in diameter, which is about half the size of a standard SC connector ferrule. Zirconia split-sleeves with smaller diameters support adapters, duplex couplers, and similar jumper cable applications.

MUs use a self-retention mechanism that is similar in design to a push-pull SC latch, which allows for blind mating inside a printed circuit board backplane. It is not yet possible to purchase transceivers with an MU interface, although some development work has been started in this area.